It was with great anticipation James set out for a days fishing in the little town of Moriville. With the fishing contest due he wanted to have a good days practise before the big event. 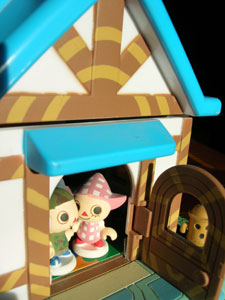 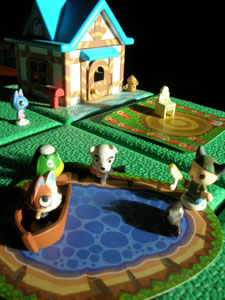 "You got your packed lunch?" Asked Pinny.
"I think I put it in there with my blood worms." Replied James, rumaging around in his tackle box.
"Oh! Well, have a good day and don't fall in. See you pet." Added Pinny as James left for the lake.
"Bye. Stoke up the fire as we'll be frying tonight!" Retorted James as he boldly strode out the cottage.

The lake wasn't far and James was soon set up spinning out a few casts. It was a beautiful, crisp winters day - perfect for bagging a few greedy trout.
"Maybe even that monster pike..." James thought to himself recalling the words of his good friend Grizzly.

A few of the old boys were down by the lake. Captain was happily rowing away on his boating trips, singing songs of some old maiden in some far away town. KK was playing the blues, strumming his acoustic guitar whilst staring into the deep blue abyss with a rather melancholic look on his whiskered face. 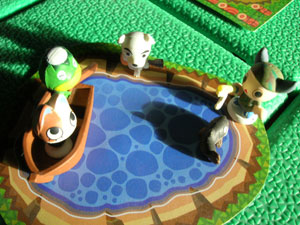 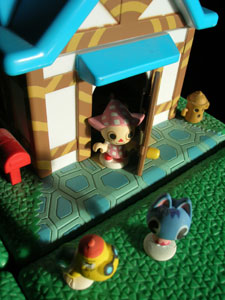 "Hi KK. How's it going?" Cheerily James greeted KK.
"Sweet man, but I'm worried about snowman." KK replied not looking up from the lake's sunny sheen.
"Snowman? What's wrong with him? Has he been using his electric blanket again?" Enquired James as he reeled in his first of the day- a catfish!
"No, not this time." KK broke into a howl and plucked deep the notes from his guitar. "He's melting!"

James rushed home having freed a nervous looking catfish to fight another day. He told Pinny the news. Just then there was a knock at the door.

The mayor had come to visit.
"As Mayor of Moriville I am visiting you in an official capacity today." Declared Mayor Tortimer his voice wavering slightly.
"Today is Snow Day and not a single flake has fallen." Tortimer continued stopping only to slurp his tea.
" We need your help in saving the poor Snowman." He finished with a milky moustache covering his wrinkled skin. 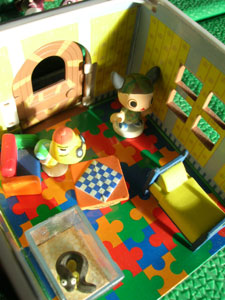 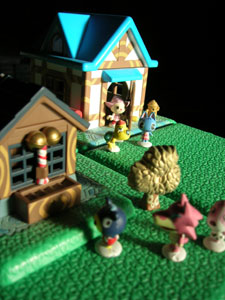 I understand the seriousness of the situation..." James replied gazing out of the window.
"But I need time to think."

The townsfolk had gathered to pray for the Snowman as with each drip from his body the vitality seemed to be draining from him.
The Mayor went on his way, having mumbled something about needing to complete the paperwork for an Anti Social Behaviour Order on a big bear.

Naomi held vigil over the Snowman, shielding from the midday sun with her dainty frame. He lay slumped where he had fallen - putting his wood worm riddled pumpkin drawers out at the tip. 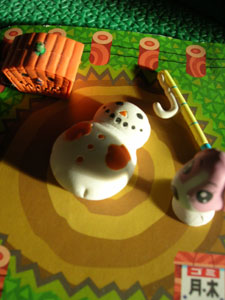 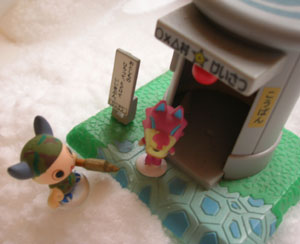 Half way through his third cup of tea, it suddenly was as clear as the blue skies outside.
"If ever in doubt, give old Wolfie a shout." James repeated the immortal words the fountain had given him. He slung his axe over his shoulder, said farewell to Pinny and headed off to the Eagles Dare mountain.As James climbed up the mountain with determination, the weather grew colder until there was an icey chill. When he reached the clearing he was already trudging through crisp snow, behind the pine tree was Wolfie's cabin - a clear tribute to his days as Moriville's finest poilceman. Sadly those days were over since a scrap with a raging pig whilst on duty...

"Hello Wolfie." Panted James.
"Always a pleasure." Replied the grinning Wolfie, pleased to have a visitor to his mountain abode.
James explained about Snowman, gradually regaining his breath and composure. Wolfie listened intently and in silence, a habit from his police days. He then retreated into his cabin.
"Leave it up to me." Wolfie calmly replied as he dialled his mobile phone.
"Wendell? Wolfie. Good thanks friend. Listen I need a favour..."

On the way back down the mountain Wolfie explained about his walrus friend Wendell and his connections in Penguin Airlines. A fleet of thirty penguin jets had been mobilised to perform 'Operation Snow Drop.' The spring returned to James legs as he wearily made his way with Wolfie back down the winding mountain path.

It was with a great warmth Snowman greeted James upon his return. Certainly warmer than the deep snow that lay deep around the town. Wolfie kept his head down being somewhat outcast from Moriville since the infamous run-in with Rasher and Hambo. 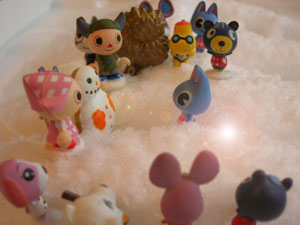 All the townsfolk had gathered to see the commotion. Even the Mayor had taken time out from evicting some rodents behind on their rent to greet the grinning Snowman.
"Snowman - I'm going to build you a giant freezer room so you never need worry about melting again." Declared Bob, manager of the out of town Denki Electrics sensing an opportunity to russle up some business.
Naomi looked on lovingly. The goodfolk of Moriville cheered and everyone slept well that night.
The end.

Meet James, Wolfie and the good folks of Moriville in our Animal Crossing section.


Some Other New Arrivals See All